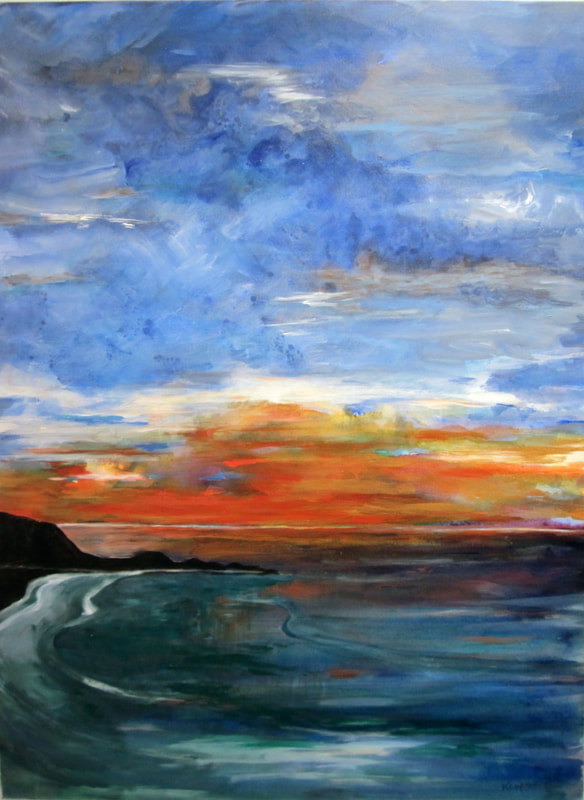 ' 6 am on the Coast ', Mixed Media on canvas, 120 cm x 90 cm SOLD
Very early on I knew the painting for me, was not about putting a photographic image on a canvas, but rather about a painting’s ability to communicate an emotion or a feeling - (my first exhibition Red Roads,  was an amateurish but passionate expression of frustration). Also that inspiration came from other stimuli than, as well as, the surrounding landscape - its forms and brilliant intense colours absorbed consciously and unconsciously.
When mediaeval and early Renaissance painting and Persian miniatures were studied came the realisation that while having their own individuality and landscape and narrative elements, they often had appealing mystical vibes as they interpreted largely non-secular themes. It was however music and poetry that affected the more, in particular it was the words that produced a visual and emotional image that resonated within me until they became an integral part of the painting process.

The small gouache and water colour works like a visual diary where ideas, memories, images both visual and textual flash past; the imprints retrieved later to become larger paintings. The larger works although referenced from and to the smaller are abstractions from them and are more about painting for its own sake.  They are pairings that inform each other.

Sometimes I am unsure which comes first, the emotion realised by the verbal images created by the poets or the drama of the surrounding physical environment. Perhaps it does not matter which comes first if they inform each other. The landscape has become a metaphor, a construct between observation and emotion; in the painting of course is a metaphor and only reality in the physicality of the paint upon the canvas.